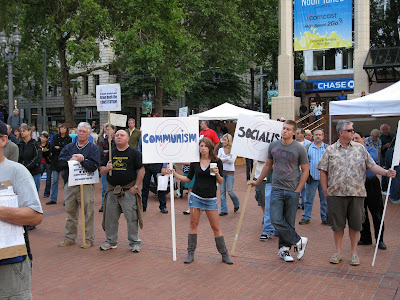 In case you were wondering, this's what I've been thinking about lately as Advisor B and I hustle towards finally a-finishing our Tea Party papier. In addition to writing the best book about the larger cultural and racial stakes of the ludicrous initiative process that I have been able to glom, Hosang's also translated the "invisibility" of the hegemonic political subjectivity du jour into something goddamned see-able :

Political whiteness describes a political subjectivity rooted in white racial identity, a gaze on politics constituted by whiteness. This concept draws from and extends both George Lipsitz's observations about the "possessive investment in whiteness" and Cheryl Harris's critical account of "whiteness as property." Whiteness, Lipsitz argues is "possessed" both literally in the form of material rewards and resources afforded to those recognized as white as well as figuratively through the "psychological wages" of status and social recognition detailed by W.{ths}E.{ths}B. DuBois. Harris similarly describes a "valorization of whiteness as treasured property," recognized by the law and enforced by the state, which produces a "settled expectation" that its beneficiaries will face no "undue" obstacles in claiming its rewards. Whiteness, she explains, "is simultaneously an aspect of identity and a property interest, it is something that can be both experienced and deployed as a resource."

The concept of political whiteness describes how these norms, "settled expectations," and "investments" shape the interpretation of political interests, the boundaries of political communities, and the sources of power for many political actors who understand themselves as white. It does not simply describe the interests or politics of "white people," which after all are necessarily varied. It instead concerns the process by which some political claims and interests come to be defined as white. James Baldwin described an "American delusion" fostered by whiteness that leads people to believe "not only that their brothers all are white but that the whites are all their brothers."Like whiteness in general, political whiteness is a subjectivity that constantly disavows its own presence and insists on its own innocence. It operates instead as a kind of absent referent, hailing and interpolating particular subjects through various affective appeals witnessed in claims to protect "our rights," "our jobs," "our homes," "our kids," "our streets," and even "our state" that never mention race but are addressed to racialized subjects.Political whiteness is, in one sense, a widely studied phenomenon. Scholars and observers have long sought to explain the relationship between white racial identity and political behavior and action. In most accounts, however, white racial identity is viewed as fully realized and defined, constructed outside of the field of politics. Conflicts like ballot measures merely express its preordained interests. This account, by contrast, does not view political whiteness as a fixed, a priori identity that simply becomes expressed through political conflicts. Carmichael and Hamilton's argument certainly holds true: there are deep "traditions" of racism embedded in diverse institutions and structures that shape the contours and trajectory of white political identity at any given moment. But white political identity is hardly static; it also becomes transformed and renewed through struggles such as ballot initiative campaigns.

The Hegemonic Character of Political Whiteness
Political whiteness bears two characteristics that are central to all hegemonic formations. First, as cultural studies scholar Raymond Williams explains, "the hegemonic has to be seen as more than the simple transmission of an (unchanging) dominance. On the contrary, any hegemonic process must be especially alert and responsive to the alternatives and opposition which question and threaten its dominance" because a "lived hegemony is always a process." It must be "renewed, recreated, defended, and modified" as it is "continually resisted, limited, altered, [and] challenged by pressures not all its own."California's racialized ballot measures reveal precisely such a process at work. Taken together, they demonstrate the contested formation of political whiteness, a gaze on politics that is characterized by both continuity and change. Rather than viewing these ballot measures as primarily concerning the rights of various racialized minorities, we can understand them instead as contests over the political authority and "settled expectations" of whiteness itself.A central assertion of this book is that the political forces that opposed civil rights and racial justice policies are the ones that have best understood the malleable nature of political whiteness, and have constantly tested the ways they could adapt and incorporate new ideas, values, and experiences. Their opponents, by contrast, rarely attempted to challenge political whiteness as a fundamental identification, treating it instead as an inexorable force of political life.Williams's second point about hegemonic formations concerns the question of opposition. By definition, ballot initiatives are viewed as contests between opposing political projects, which presumably do not share similar ideas, commitments, or values. But Williams argues that the very power of hegemonic formations derives from their capacity to shape the terms on which they are opposed: "nearly all initiatives and contributions, even when they take on manifestly alternative or oppositional forms, are in practice tied to the hegemonic: that the dominant culture, so to say, at once produces and limits its own forms of counter-culture."