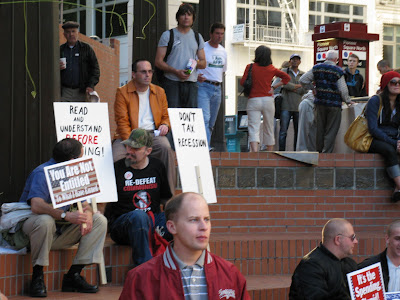 Listen - I dunno how much time you want me to spend on explaining how this year's reading list was overdetermined by external events, my dissertation, etc., so just lemme say this: I did a lot less actual book-reading this year than I have in the four, five, six years previous. If anything, I hope this underwhelming list (of neither "high" nor "low" lights) will inspire some of our distinguished bloggers, commenters, etc., so that they'll use the occasion to reminisce on books they read and liked this year. It's a good excuse for looking back on shit - even non-book shit - you know?

Invisible Hands: The Businessman's Crusade Against the New Deal
by Kim Phillips-Fein
A major motif of my academic-ish readings in 2009 was a dip out of academic social and political theory, into a) more "applied" political science writing and b) the necessarily more "empirical"/"historicist" realm of the history of conservatism (both Perlstein's Nixonland and Wilentz The Age of Reagan deserve mention, too.) Check out Phillips'-Fein's Nation Review Article posing the question, what can the histories of conservatism tell us about the current configuration feat. Tea Parties and various fledgling populisms.

From Marxism to Post-Marxism
by Goran Therborn
I will revisit this work, no doubt, in making the argument that my dissertation "methodology" is """ marxism, """ but in the longer run, I fear I find it a little middling, and appropriate only for a grad-level Marxism seminar I'm increasingly less likely to ever one day teach.

Fat Man in a Middle Seat
by Jack Germond
You remember Germond [pic. below, Right] as the "fat man" from the McLaughlin Group, and his memoir is a weird, newsy, drunk, dry, drab denunciation of the (Clinton-era) political culture. I blame my unfortunate dependence on cable news for situating me such that this kind of well-meaning, liberalist batinage tastes like a grilled cheese sandwich to me after a long day "working." 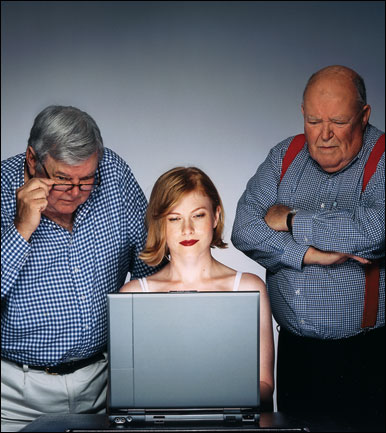 The Eliminationists
by David Weinert
Domestic terror was on the brain, for obvious reasons. Which side is allowed to call the other one "fascist," again?

Plunder and Blunder
by Dean Baker
Have I ever mentioned this guy before? I am thinking about forcing this, if not The United States Since 1980 on some anthropology undergraduates this Summer who are doubtlessly expecting something about female genital cutting instead. It is the best explanation of the "current crisis" that I've read.

The Family
by Jeff Sharlet (who has a blog, I am thrilled to know.)

“Un-American theocrats can only fool patriotic American democrats when there aren’t critics like Jeff Sharlet around -- careful scholars and soulful writers who understand both the majesty of faith and the evil of its abuses. A remarkable accomplishment in the annals of writing about religion.”
--Rick Perlstein, author of Nixonland: The Rise of a President and the Fracturing of America

Now, what the crap non-fiction did you read?

Chasepack Where Are They Now: Crying for Rudy edition

The Daily News, which recently suggested Rudy Giuliani was on the verge of a Senate bid, reports that he'll declare tomorrow he's not running.

Posted by EZ
Not sure what I can add...anybody going to watch???
Why do Nelson(d-hahA) and Lieber (I-diot) get to have their demands met but not Sanders(S-ocialist) or Brown(D-oh)???

I say pass whatever you can in the senate, then nudge the thing left in conference...(if there is one...I have no knowledge of any precedent for forgoing conf. but have heard talk that they might "waive it")
Posted at 00:00 6 comments